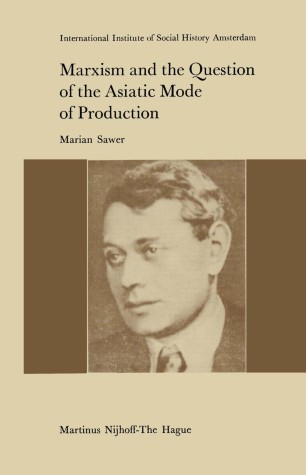 Marxism and the Question of the Asiatic Mode of Production

Wherever possible in this monograph I have referred to English trans­ lations of works originally appearing in other languages. Where this has not been possible, for example with Russian material, I have followed the Library of Congress system of transliteration, but omitted the diacritics. I have also retained the conventional use of 'y' for the ending of certain Russian proper names (e.g., Trotsky not Trotskii). In accordance with the policy of using existing English translations, I have referred to the Martin Nicolaus translation of Marx's Grundrisse, which is relatively faithful to the text. (The Grundrisse, although the Dead Sea Scroll of Marxism, bear all the characteristics of a rough draft, characteristics which are preserved in the Nicolaus translation.) The term 'Marxian' has been employed in the conventional way in this book, to distinguish the views of Marx and Engels from those of their 'Marxist' followers. In preparing this work I have received bibliographical assistance from Professor Israel Getzler, now of the Hebrew University, and critical assistance from Mr Bruce McFarlane of the University of Adelaide and especially from Professor Eugene Kamenka of the Aus­ tralian National University. Professor Jean Chesneaux of the Sorbonne, as one of the leading participants in the more recent debates discussed here, provided me with some further insight into the issues, and Pro­ fessor K.A. Wittfogel of Columbia also supplied some valuable in­ formation.