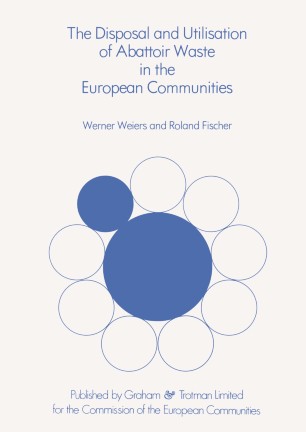 The Disposal and Utilisation of Abattoir Waste in the European Communities

The problem of pollution of the environment arose for the first time with the beginning of Industrialization. At that time there was no need to think about disposal of waste. There was no reason to do so because the space available to man and other living creatures appeared quite adequate. The life expectancy of man has risen as a result of the enormous advances In technology and medicine. In 1650 It was 30 years throughout the world whi Ie In 1970 It had risen to 53 years, and this has consequently been accompanied by a population exp los I on. Whl Ie the world population in 1650 was some 500,000,000, in 1970 It was about 3,600,000,000. Assuming that mortality does not rise sharply, the population potential 1 for the year 2000 is expected to be some 7,000,000,000 • Industrial production has grown to an even greater degree than the world population. The growth of noxious substances has developed with the growth of the population on the one hand and with industrial growth on the other. The growth of slaughterhouse waste is directly related to population growth, because as the population -increases so does the demand for meat and meat products. Consumption habits have also changed with Increasing prosperity so that there has been an increase in the proportion of slaughterhouse by-products which are difficult to market.