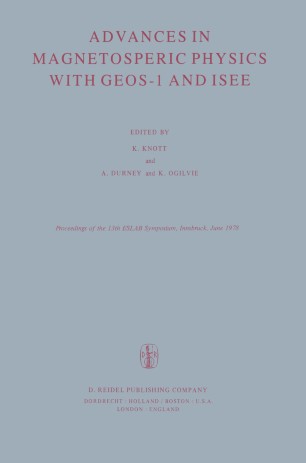 Advances in Magnetosperic Physics with GEOS-1 and ISEE

(Opening Address of 13th ESLAB Symposium) With GEOS and ISEE occupying a major part of the ESA scientific programme it was clear several years ago that a 'natural' basis for the 1978 ESLAB Annual Symposium would be the early data from these two spacecraft. During the 1976 meeting of the European Geophysical Society in Amsterdam it became apparent to me that a much wider community was interested and that in particular Working Group 2 of COSPAR was considering a GEOS session during its 1978 meeting here in Innsbruck. This was of course as it ought to be because GEOS had been adopted as the reference spacecraft for the International Magnetospheric Study. After some discussions with COSPAR and with the organizers of the STP Symposium which was held here last week we felt that in the interest of customer relations and following good common sense we should give up some of our independence in 1978 and merge our Symposium with COSPAR. I would gratefully acknowledge the co-operation of COSPAR's Working Group 2 chairman and vice-chairman, the active support of the President of COSPAR and the 'gentleman's agreement' with the STP programme committee which arranged that the new ISEE and GEOS results were routed to this Symposium rather than to the STP. I have talked about how we came to have this joint Symposium. Perhaps I should tell you too how we came close to having no Symposium.