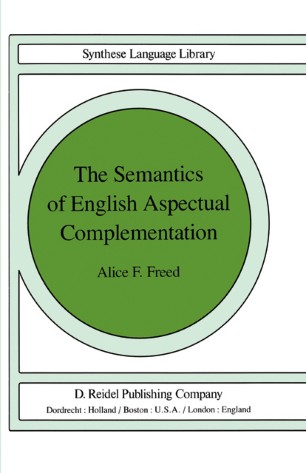 The Semantics of English Aspectual Complementation

Complementation has received a great deal of attention in the past fifteen to twenty years; various approcahes have been used to study it and different groups of complement-taking verbs have been examined. The approach taken here employs analytic techniques which have not been systematically applied before to this group of temporal aspectual verbs. In other works which have concentrated on these same verbs (perlmutter, 1968, 1970 and Newmeyer, 1969a, 1969b) few insights about the semantic properties of the verbs are formalized. In the present study, the various verbs and their complement structures as they appear in surface forms are considered for their associated presuppositions and consequences (entailments). The notions of presup­ position and consequence are defmed and used so as to take conversational interaction into consideration. This adds considerably to the information that can be obtained about the verbs in question. Furthermore, the analysis of these temporal aspectual verbs leads to a description of their complement structures in terms of 'events', a semantic category found to appropriately characterize the quality of most of these structures. In this analysis, events are described as consisting of several different temporal segments; thus the sentences contained in the complements of these verbs are described as naming events, each containing one or more of several possible temporal segments. The aspectualizers in tum, act as referentials, each referring to one or another of the event-segments named in their complements.