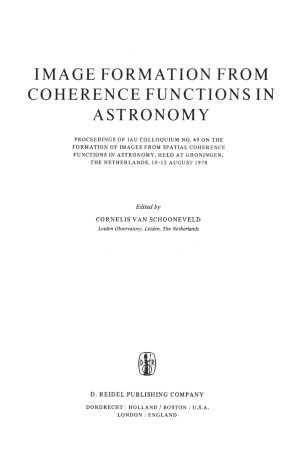 Proceedings of IAU Colloquium No. 49 on the Formation of Images from Spatial Coherence Functions in Astronomy, Held at Groningen, The Netherlands, 10–12 August 1978

The IAU Colloquium No.49, on the formation of images from spatial coherence functions in astronomy, was held at Groningen, the Netherlands, during the period 10-12 August 1978. The colloquium was attended by 108 participants from 14 countries (U.S.A. 29, the Netherlands 20, U.K. 19, Germany 10, France 7, Australia 5, Canada 5, Japan 4, India 2, New Zea­ land 2, Sweden 2, Argentina I, Belgium I, Israel I). It was sponsored by the Netherlands Foundation for Radio Astronomy, the International Astronomical Union, the Department of Education and Sciences, the Union Radio-Scientifique Internationale, the Leiden Kerkhoven-Bosscha Foundat­ ion and the State University at Groningen. This volume contains 36 of the 37 papers presented. Nearly all papers are followed by a sununary of the discussion that took place after their presentation. A few papers, published in full elsewhere, are given only as abstracts. The majority of the papers are related to aperture synthesis in radio astronomy; a small number deal with optical astronomy and with applications in acoustics and medicine. The presentations are divided in 7 groups: aperture synthesis and its deficiencies, the problem of limited or missing phase information, techniques for processing and data display, optical interferometric methods, maximum entropy image reconstruction, other image improvement methods, and a survey of image formation from projections. Each group contains one or two invited lectures (see Table of Contents), intended as surveys of particular areas; on the average they occupy twice as many pages as the other papers.