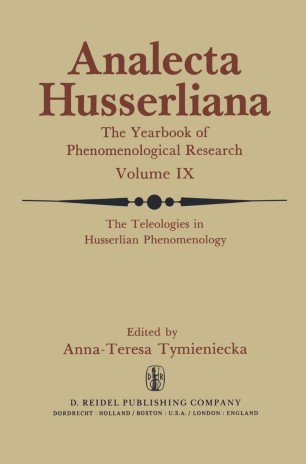 The Teleologies in Husserlian Phenomenology

The Irreducible Element in Man. Part III ‘Telos’ as the Pivotal Factor of Contextual Phenomenology

The following bibliography, arranged chronologically, permits the reader to follow the development of phenomenological studies in Italy in parallel with other, contemporary, cultural currents. From this list it can be seen that knowledge of Hussed's work begins in 1923 with the studies of A. Banfi. Phenomenology, however, did not immediately receive a warm welcome. It contrasted with the then dominant neo-idealism (as has been made clear by G. De Ruggiero), but for this very reason it also found adherents among the opponents of idealism. These were either distant heirs of positivism, who accepted Hussed on account of his scientific approach and rigor, or Christian­ oriented thinkers, who, following an initial period of diffidence toward the antimetaphysical attitude of phenomenological analysis, gradually began to use this method as an antiidealist instrument - even though the problem remained of Hussed's own transcendental idealism and the value to be attributed to it. Despite the difficulties encountered on the way, the numerous studies carried out in Italy prior to Wodd War II make it clear that the better known philosophers who have left a mark on Italian culture already had begun to take a discreet interest in phenomenology.