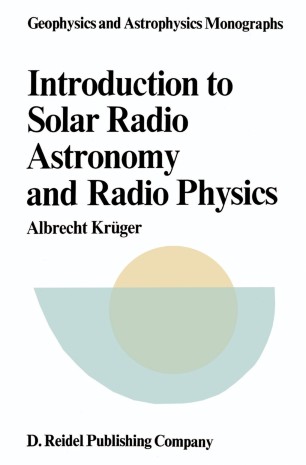 1. 1. Short History of Solar Radio Astronomy Since its birth in the forties of our century, solar radio astronomy has grown into an extensive scientific branch comprising a number of quite different topics covering technical sciences, astrophysics, plasma physics, solar-terrestrial physics, and other disciplines. Historically, the story of radio astronomy goes back to the times of James Clerk Maxwell, whose well known phenomenological electromagnetic field equations have become the basis of present-time radio physics. As a direct consequence of these equations, Maxwell was able to prognosticate the existence of radio waves which fifteen years later were experimentally detected by the famous work of Heinrich Hertz (1887/88). However, all attempts to detect radio waves from cosmic objects failed until 1932, which was mainly due to the early stage of development of receiving techniques and the as yet missing knowledge of the existence of a screening ionosphere (which was detected in 1925). Therefore, famous inventors like Thomas Edison and A. E. Kennelly, as well as Sir Oliver Lodge, were unsuccessful in receiving any radio emission from the Sun or other extraterrestrial sources. Another hindering point was that nobody could a priori expect that solar radio emission should have something to do with solar activity so that unfortunately by chance some experiments were carried out just at periods of low solar activity. This was also why Karl Guthe Jansky at the birth of radio astronomy detected galactic radio waves but no emission from the Sun.