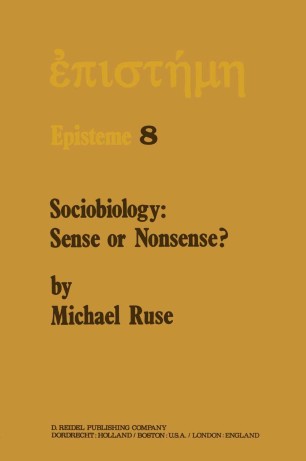 In June 1975, the distinguished Harvard entomologist Edward O. Wilson published a truly huge book entitled, Sociobiology: The New Synthesis. In this book, drawing on both fact and theory, Wilson tried to present a com­ prehensive overview of the rapidly growing subject of 'sociobiology', the study of the biological nature and foundations of animal behaviour, more precisely animal social behaviour. Although, as the title rather implies, Wilson was more surveying and synthesising than developing new material, he com­ pensated by giving the most thorough and inclusive treatment possible, beginning in the animal world with the most simple of forms, and progressing via insects, lower invertebrates, mammals and primates, right up to and in­ cluding our own species, Homo sapiens. Initial reaction to the book was very favourable, but before the year was out it came under withering attack from a group of radical scientists in the Boston area, who styled themselves 'The Science for the People Sociobiology Study Group'. Criticism, of course, is what every academic gets (and needs!); but, for two reasons, this attack was particularly unpleasant. First, not only were Wilson's ideas attacked, but he himself was smeared by being linked with the most reactionary of political thinkers, including the Nazis.