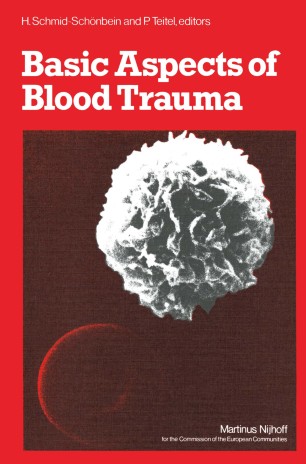 A Workshop Symposium on Basic Aspects of Blood Trauma in Extracorporeal Oxygenation held at Stolberg near Aachen, Federal Republic of Germany, November 21–23, 1978

The contact between the human blood and foreign technical apparatus (circulatory) and respiratory assist devices, arti­ ficial kidneys) leads to changes in the plasmatic and cel­ lular components of the blood, which have often only been taken as signs of gross but passive blood destruction. There is much evidence to support this notion in parts (mechanical cellolysis of erythrocytes and thrombocytes), however, these changes have to be seen in a broader bio­ logical context as an organ-specific reaction of the blood. It is an unjustified oversimplification to simply treat the blood as transport organ for respiratory gases (02 and CO ) and metabolites. The blood is rather also an organ 2 system for specific and unspecific defense mechanisms, di­ rected against the hazards of mechanical, microbiological and toxicological risks posed to multicellular macro-orga­ nisms in an environment in which trauma and other distur­ bances of the physical integrity are common. The two defense systems of the blood are based on humural and cellular constituents; the latter have to be considered as "excitable cells", capable of responding in a predictable and automatic fashion to adequate stimuli. The response of the cellular constituents in controlled and coordinated by chemical mediators. The immunological research of the last century has distinguished two separate defense systems of the blood: I. The highly specific defense system (immune system sen­ sustrictori) which is phylogenetically new and is ontogenetically learned.