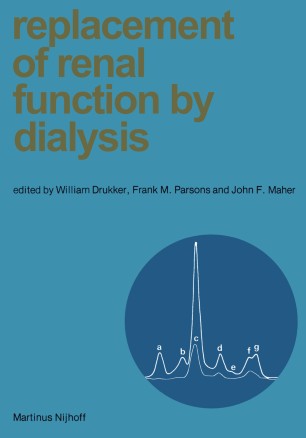 Replacement of Renal Function by Dialysis

BELDING H. SCRIBNER The year was 1942 and Will em Kolff was hard at 60's, we encountered exactly the same kind of work perfecting the device that would not only resistance to the concept of chronic dialysis. But revolutionize the treatment of renal failure, but as has happened over and over again in all of more importantly point the way to the develop­ science, the heresy of one decade becomes the ment of the entire field of extracorporeal devices practice of the next - a phenomenon that the in general and cardiac bypass devices in particular. young heretics among the third generation readers The enormity of the impact that Kolffs con­ of this volume should not forget. tribution was to have on medicine was revealed And so, today Drukker, Parsons and Maher retrospectively to me when I recalled that in that have successfully undertaken the very difficult same year, 1942, I was a second year medical task of bringing together in one volume all the student at Stanford University, taking among diverse elements of dialysis therapy. The size of other things, P. J. Hanzlik's required course in the volume reflects not only the magnitude ofthe pharmacology. I have two memories of that interdisciplinary effort that brought about the course. One was the requirement that we students technical and clinical advances, but also the learn to recognize 64 old time drugs by appear­ many clinical and other ramifications of dialysis ance, smell and taste. For better or worse, almost therapy.