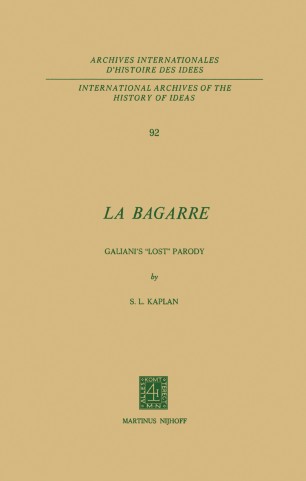 Part of the International Archives of the History of Ideas book series (ARCH, volume 92)

It is my hope that this publication of a "lost" work by Galiani will interest scholars of many nations and disciplines. Few writers could make a more compelling claim upon such a cosmopolitan audience. An Italian with deep roots in his homeland, Galiani achieved celebrity in the salons of Paris. An ecclesiastic, his most notable concerns were worldly, to say the least. An erudite classicist, Galiani was passionately concerned about economics and technology. A philosophe and ostensibly something of a subversive, he was enthralled by power and he served for many years as a government agent and adviser at home and abroad. Galiani embodied many of the preoccupations and paradoxes of the Enlightenment. His­ torians and literary analysts devoted to the study of the lumie'res through­ out Europe are bound to find Galiani's work important. In recent years there has been an efflorescence of interest in the history of political economy and its relationship not only to the history of ideas but also to the history of social structure, economic development, admin­ istrative institutions, collective mentalities, and political mobilization. Galiani's work helps to crystalize many of these connections which scholarly specialization has tended to obscure. Galiani had a leading voice in one of the most significant debates in the eighteenth century on the implications of radical economic, social, and institutional change.