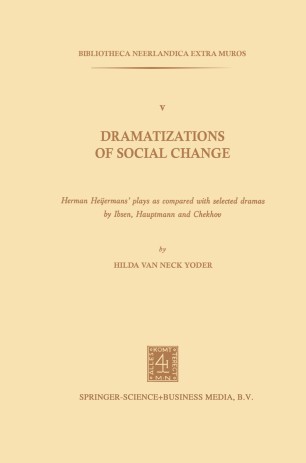 Herman Heijermans (1864-1924) was convinced that he lived in an "overgangs­ 1 tijdperk," a transitional period. As a young man in the eighteen nineties, he rejected those values and life styles which he felt belonged to the past period dominated by the bourgeoisie, and sought out situations and a profession which would attune him to the future when, he hoped, the proletariat would 2 be in power. He left the conservative business milieu of Rotterdam in 1892 and went to Amsterdam- then teeming with radical ideas. At first, Heijermans was attracted to a group of poets, de tachtigers, who were claiming to have enlivened the stale tradition of Dutch poetry by discovering language and beauty in a totally new way; but soon he felt them to be elitist. Then, in 1895, he became a member of the newly founded Dutch Social Democratic Workers Party. He alienated himself from the literary circles by claiming that art should be socialistic and by rejecting the class separation between artists and workers. He felt himself to be one with the proletariat and, through them, with "The New Life" and "The New Humanity. " Stimulated by the ongoing theater revival, which he interpreted as an attempt to challenge the bourgeois smugness and moral self-righteousness, he had started to write plays before becoming interested in the Socialist Party.