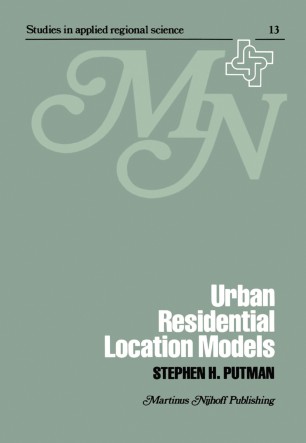 The decade of the 1970's has seen substantial improvement in our under­ standing of the determinants of urban spatial patterns. It is typical of western science and technology of the past several centuries that these advances in urban spatial analysis have resulted from the efforts of many individuals. No one of these claims to have found the answer; rather, each contributes some additional understanding of a rather complex set of inter­ related phenomena. All of this most recent work, in one way or another, rests on preliminary analysis work done in the previous ten to fifteen years. Those earlier efforts are the subject of this book. A very few studies of urban spatial patterns were done prior to 1960. However, it was not until then, with the coming of age of electronic data processing machinery, that work began in earnest. Many theories and theoretical models of urban form were postulated, and some were tested. Often the tests were inconclusive or unsuccessful. The theories often lacked consistency and coherence. Some of the testing was inadequate or even inappropriate. Much of the research was done amidst the turmoil (and sometimes chaos) of attempted (and often premature) application. The results were frequently incompletely described, if described at all. Yet, out of all this, there began to emerge some clearer notion of the determinants of urban spatial patterns.