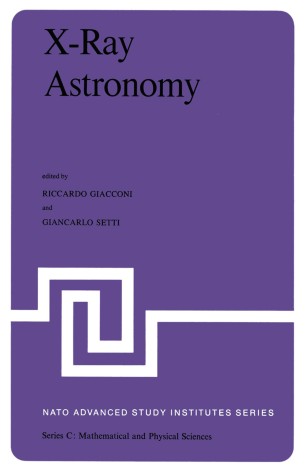 This volume contains a series of lectures presented at the 5th Course of the International School of Astrophysics held in Erice (Sicily) from July 1st to July 14, 1979 at the "E. Majorana" Centre for Scientific Culture. The course was fully supported by a grant from the NATO Advanced Institute Programme. It was attended by about one hundred participants from ten countries. Since the discovery of the first extra-solar X-ray source in the early 1960's, X-ray astronomy has played an increasingly im­portant role in the study of the Universe, bringing new insight to almost every field of modern astrophysics from stellar evolution to cosmology. Generally speaking, this branch of astronomy is concerned with the discovery, classification and study of "hot matter" in the universe, including high energy non-thermal pheno mena. In particular, X-ray observations appear to provide the main, if not the only, probe to inspect regions where collapsed objects are formed, such as the environment of neutron stars and of black holes in the presence of matter accretion onto the ob­jects themselves. It is significant that the first candidate black hole (Cyg X-I) has been primarily singled out by its X-ray emission. In the same context, it is well known that one of the fundamental problems in modern astrophysics is the understanding of the strong activity taking place in galactic nuclei.