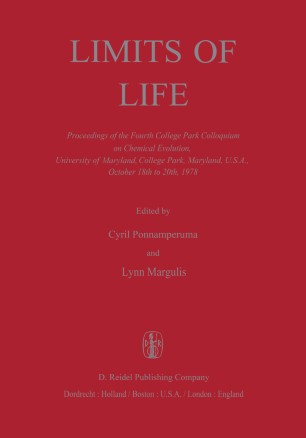 Part of the Limits of Life book series (PCPC, volume 4)

This volume is the fourth in the series of the Proceedings of the College Park Colloquia on Chemical Evolution. These Colloquia, and the resulting Proceedings, are presented in the interest of fostering the impact of the interdisciplinary nature of chemical evolu­ tion on contemporary scientific thought. vii EDITORS'INTRODUCTION The Fourth College Park Colloquium on Chemical Evolution was held on October 18 - 20, 1978 at the University of Maryland. The meeting, supported by the National Aero­ nautics and Space Administration and the National Science Foundation, centered on the variable environments, both past and present, in which living organisms have survived, grown, and evolved - the limits of life. Previous colloquia had emphasized the Giant Planets (1974) 1, Early Life during the Precambrian (1975)2 and Comparative Planetology (1976)3. The College Park Colloquia have been noted for the broad interdisciplinary nature of the training and interests of the participants. The fourth meeting was no ex­ ception with the participation of approximately 85 researchers, representing many academic fields. As with previous meetings, the interdisciplinary approach to the question of the limits of life encouraged the exchange of knowledge and information. A major scientific aspiration is to understand why living systems are restricted to certain environments.