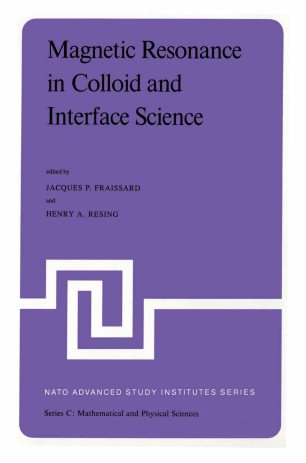 In 1976, on the occasion of the Centennial of the Ameri­ can Chemical Society, H. A. RESrnG and C. G. WADE organized an international symposium on magnetic resonance in collo1d and in­ terface science which brought together a large number of scien­ tists from the United States and from abroad. The aim of this symposium was to include all experimental inorganic, organic and biochemical systems in which molecules are bound to interfaces and to show the contribution of various techniques based on ma­ gnetic resonance to the knowledge of these systems. This ambi­ tious program resulted into a very interesting gathering that initiated a more interdisciplinary approach to the problem of interfaces. Because of the success of this symposium it was sug­ gested that a similar meeting should be organized in Europe within the next three years. Professor J. FRAISSARD accepted this task but, conside­ ring the rapid developments in the theory and in the applica­ tions of the magnetic resonance spectroscopies, the organ1z1ng committee decided to arrange the meeting to be held in MENTON (France) in two parts, the first being a School and the second the Symposium proper. The former was' intended to review and to teach theoretical aspects as well as to discuss the experimental results derived from these advanced methods; the Symposium was to be for the discussion of the latest results at the highest level.