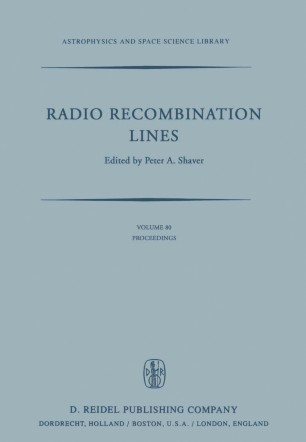 Since their first detection 15 years ago, radio recombination lines from several elements have been observed in a wide variety of objects including HII regions, planetary nebulae, molecular clouds, the diffuse interstellar medium, and recently, other galaxies. The observations span almost the entire range from 0.1 to 100 GHz, and employ both single­ djsh and aperture synthesis techniques. The theory of radio recombination lines has also advanced strongly, to the point where it is perhaps one of the best-understood in astro­ physics. In a parallel development, it has become possible over the last decade to study these same highly-excited atoms in the laboratory; this work provides further confirmation of the theoretical framework. However there has been continuing controversy over the astrophysical interpre­ tation of radio recombination line observations, especially regarding the role of stimulated emission. A workshop was held in Ottawa on 24-25 August, 1979, bringing together many of the active scientists to review the field and discuss these questions of interpretation. A broad concensus has emerged: the subtleties of the line-formation process are understood, and the conditions under which reliable in­ formation can easily be extracted from the line measurements are known. It thus appears likely that the emphasis will shift increasingly from the study of the line phenomenon itself to further application in other areas of astrophysics, ranging from physical processes in plasmas (temperatures, densities, ionization structure), to the large-scale properties of our galaxy (abundances, kinematics, structure), and studies of extragalactic systems.