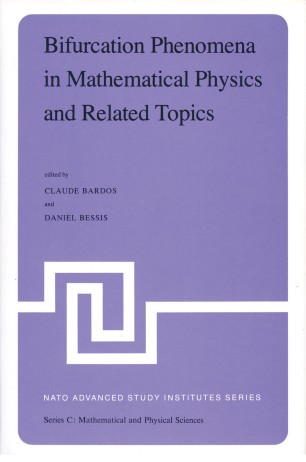 One of the main ideas in organizing the Summer Institute of Cargese on "Bifurcation Phenomena in Mathematical Physics and Related Topics" was to bring together Physicists and Mathematicians working on the properties arising from the non linearity of the phenomena and of the models that are used for their description. Among these properties the existence of bifurcations is one of the most interesting, and we had a general survey of the mathematical tools used in this field. This survey was done by M. Crandall and P. Rabinowitz and the notes enclosed in these proceedings were written by E. Buzano a]ld C. Canuto. Another mathematical approach, using Morse Theory was given by J. Smoller reporting on a joint work with C. Conley. An example of a direct application was given by M. Ghil. For physicists the theory of bifurcation is closely related to critical phenomena and this was explained in a series of talks given by J.P. Eckmann, G. Baker and M. Fisher. Some related ideas can be found in the talk given by T. T. Wu , on a joint work with Barry Mc Coy on quantum field theory. The description of these phenomena leads to the use of Pade approximants (it is explained for instance in the lectures of J. Nuttall) and then to some problems in drop hot moment problems. (cf. the lecture of D. Bessis).