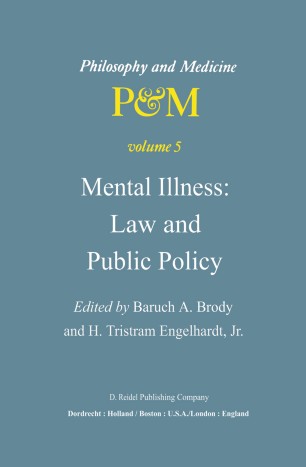 Part of the Philosophy and Medicine book series (PHME, volume 5)

This volume developed from and around a series of six lectures sponsored by Rice University and the University of Texas Medical Branch at Galveston in the Fall of 1976. Though these lectures on the concepts of mental health, mental illness and personal responsibility, and the social treatment of the mentally ill were given to general audiences in Houston and Galveston, they were revised and expanded to produce six extensive formal essays by Dan Brock, Jules Coleman, Joseph Margolis, Michael Moore, Jerome Neu, and Rolf Sartorius. The five remaining contributions by Daniel Creson, Corinna Delkeskamp, Edmund Erde, James Speer, and Stephen Wear were in various ways engendered by the debates occasioned by the original six lectures. In fact, the majority of the last five contributions emerged from informal dis· cussions occasioned by the original lecture series. The result is an interlocking set of essays that address the law and public policy insofar as they bear on the treatment of the mentally ill, special atten· tion being given to the defmition of mental illness, generally and in the law, to the issues of the bearing of mental incompetence in cases of criminal and civil liability, and to the issue of involuntary commitment for the purpose of treatment or for institutional care. There is as well a critical defense of Thomas Szasz's radical proposal that mental illnesses are best understood as problems in living, not as diseases.