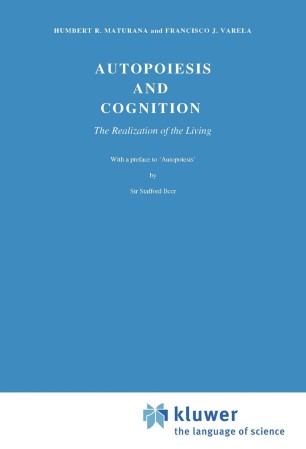 The Realization of the Living

Part of the Boston Studies in the Philosophy and History of Science book series (BSPS, volume 42)

This is a bold, brilliant, provocative and puzzling work. It demands a radical shift in standpoint, an almost paradoxical posture in which living systems are described in terms of what lies outside the domain of descriptions. Professor Humberto Maturana, with his colleague Francisco Varela, have undertaken the construction of a systematic theoretical biology which attempts to define living systems not as they are objects of observation and description, nor even as in­ teracting systems, but as self-contained unities whose only reference is to them­ selves. Thus, the standpoint of description of such unities from the 'outside', i. e. , by an observer, already seems to violate the fundamental requirement which Maturana and Varela posit for the characterization of such system- namely, that they are autonomous, self-referring and self-constructing closed systems - in short, autopoietic systems in their terms. Yet, on the basis of such a conceptual method, and such a theory of living systems, Maturana goes on to define cognition as a biological phenomenon; as, in effect, the very nature of all living systems. And on this basis, to generate the very domains of interac­ tion among such systems which constitute language, description and thinking.