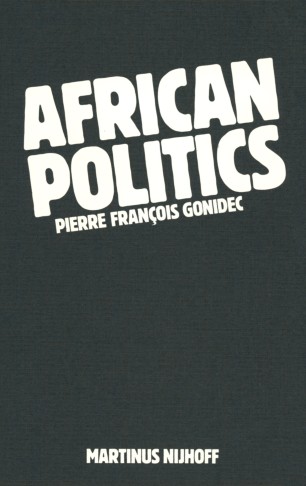 To an increasing extent, nationals of Third World countries are protesting against the tendency of foreign theoreticians and observers to study their problems - political problems in particular - in terms of concepts and theories established on the basis of European experiences. For instance, the Egyptian Abdel Malek I in La diaiectique sociaie, writes: 'At the starting point, whose broad lines we sketch here, there is evidence of inadequation, deriving from the fact of difference. Inadequation of the conceptual system of the social sciences. Differences between Western societie- which have provided the larger part of the analytical material for the con­ ceptual elaboration and establishment of theoretical systems in different disciplines - on the one hand, and non-Western societies (those of Asia, Africa and Latin America) on the other hand. ' This does not mean that the author impugns universalism and that he advocates enclosing the Third World in a sort of intellectual ghetto, overemphasizing its specificity, and constituting as it were 'reserves' designed to highlight the exotic aspect for the benefit of foreigners. 2 On the contrary, what he takes sociology to task for is its insufficiently universal and universalizing nature. This being so, his aim is to make concepts more universal and to rebuild theory with the help of reshaped concepts. Abel Malek's criticisms are largely justified. There is indeed a certain eurocentricity in the theories elaborated by political scientists, even if they deny it.