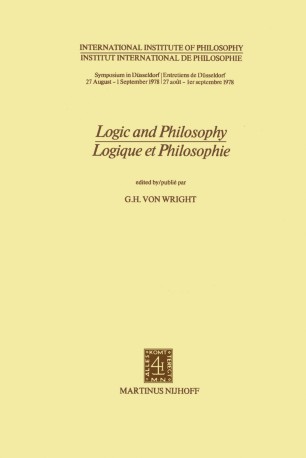 The Entretiens of the Institut International de Philosophie for 1978 were held in connection with the World Congress of Philosophy in Dusseldorf, from August 27 to September 1. The theme of the Entretiens was Logic and Philosophy (Logique et philosophie). The undersigned, then President of LI.P., was responsible for the planning of the programme. The programme was designed to consist of four sections with the headings Classical and Intuitionist Logic, Modal Logic and its Applications, Inductive Logic and its Applications, and Logic and Epistemology. The aim was also to convey to philosophers who are not experts in logic an informative and representative impression of some of the main sectors of the vast and rapidly expanding field of philosophical logic. At the same time it was thought that this impression should not be conveyed in the form of a series of survey papers but through presentations and discussions of specific topics falling under the main headings men­ tioned above. For each section a rapporteur was nominated to read a paper and an interlocuteur to comment on it. The programme chairman is grateful that he was able to engage a representative selection of front rank philosophi­ cal logicians to perform the various tasks. The papers and the comments are printed in this volume in the order in which they appeared in the Programme of the Entretiens.