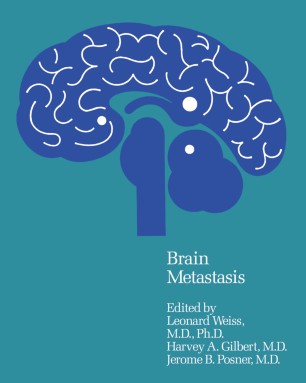 Of those people dying with cancer, many die as a result of metastases. In spite of this, a surprisingly small number of texts have been devoted to this clinically important topic. The present series of monographs originated in discussions, which convinced us of the need for texts on metasasis which would contain not only basic and clinical observations on human beings and where neces­ sary, on experimental animals but also discussions of the state of the art in diagnosis and therapy. In order to achieve this in-depth approach, for which publication was preceded by small workshops, it was necessary to impose limitations on the scope of the topic. Metastasis is therefore dis­ cussed by site, and the series is organized accordingly. The first volume in the series, Pulmonary Metastasis, was an expanded version of a Workshop held at Roswell Park Memorial Institute in 1977. This, the second volume, is based on a similar workshop on metastasis to the brain, held at the Memorial Sloan-Kettering Cancer Center in September, 1978. In organiz­ ing both the workshop and in editing this volume, we have been excep­ tionally fortunate to receive the generous cooperation of Dr. Jerome B. Posner, a practicing neurologic oncologist who has given freely of his ex­ pertise in this specialized field.