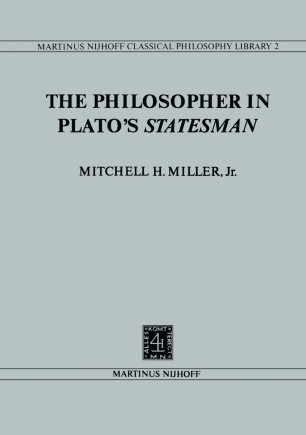 The Philosopher in Plato’s Statesman

others in his discipline tend not to bring their studies to bear on the substance of the dialogues. Conversely, philosophical interpreters have generally felt free to approach the extensive logical and ontological, cosmological, and political doctrines of the later dialogues without concern for questions of literary style s and form. Given, moreover, the equally sharp distinction between the diSCiplines of philosophy and cultural history, it has been too easy to treat this bulk of doctrine without a pointed sense of the specific historical audience to which it is addressed. As a result, the pervasive tendency has been the reverse of that which has dominated the reading of the early dialogues: here we tend to neglect drama and pedagogy and to focus exclusively on philosophical substance. Both in general and particularly in regard to the later dialogues, the difficulty is that our predispositions have the force of self-fulfilling prophecy. Are we sure that the later Plato's apparent loss of interest in the dramatic is not, on the contrary, a reflection of our limited sense of the integrity of drama and sub­ stance, form and content? What we lack eyes for, of course, we will not see. The basic purpose of this essay is to develop eyes, as it were, for that integrity. The best way to do this, I think, is to take a later dialogue and to try to read it as a whole of form, content, and communicative function.