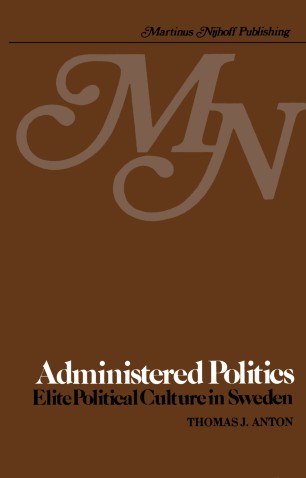 Several years ago, freshly returned from a year in Stockholm but deeply en­ meshed in the American Malaise of the late 1960's, I sketched out an image of Swedish policy-making that defined a generalized policy-making role and sought to relate that role to both citizen attitudes and the elite political culture 1 in Sweden. Although that sketch seems to have been taken seriously by other foreigners, I think it is fair to say that the principal reaction of my Swedish friends and colleagues was amusement. When I later (1970-71) returned for another year in Stockholm, I found myself being introduced at parties as the man who had written ''that marvelously out-of-date sketch of how Swedish politics used to work-hah, hah. " Or, I would be referred to as the American who, like Marquis Childs some years earlier, "believed our propaganda. " By 1970-71, of course, the Swedish political environment had become more boisterous than it had been in 1967-68. Indeed, during the course of that year my amused colleagues found themselves enmeshed in a strike action against the government that was part of an emotional series of such actions that some observers thought would bring most public services to a halt. If my earlier portrait had been influenced (too much, they thought) by the American Malaise in which I was implicated, so must their later reaction to my portrait have been influenced (too much, I thought) by the Swedish Turmoil of 1970 and 1971.