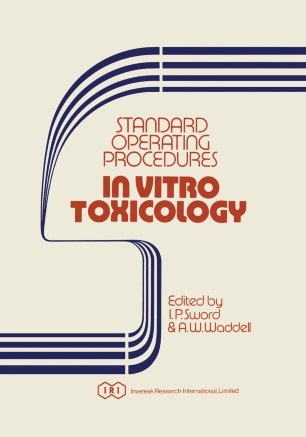 When Volume 1 (Toxicolpgy) in this series of Standard Operating Procedures was pub­ lished in early 1979, the FDA's Good Laboratory Practice Regulations did not have the force of United States Law, but nevertheless had a substantial impact on the conduct of toxicology in laboratories throughout the world. These Regulations are now in force, and Volume 2 (Pathology) was published later the same year. Our critics have implied that we have attempted to reduce toxicology to the level of the cookery book, or alternatively that we seek to impose our standards on others, In some sinister way ensuring that the IRI code will become the international norm. We dismiss these criticisms as arrant nonsense. The many thousands of volumes already sold worldwide can provide at best a framework for adaptation to suit local laboratory condi­ tions, and thus speed to GLP compliance those organisations which might otherwise have remained foundering at the starting post. If Volumes 1 and 2 of this series have con­ tributed anything to the conduct of toxicology it must surely be in those non-English speaking nations which, because of the international nature of pharmaceutical and chemical trading, are required by commercial pressures to be in compliance with a foreign law formulated in unfamiliar terminology and introduced for reasons that are not immediately obvious. Much has happened in the short period of time since Volumes 1 and 2 were published.