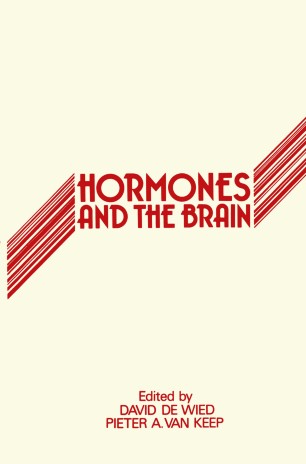 Hormones and the Brain

During the last decade it has become evident that the brain is an important target for hormones. Although it has been discovered only recently that the brain contains numerous peptide hormones, the role of pituitary and hypo­ thalamic hormones in brain activity has been the subject of basic studies for quite some time. Peptide hormones are involved in mental performance. pain perception, food and water metabolism. sleep. sexual behaviour and nursing behaviour, and disturbances in the hormonal climate of the brain may be associated with psychopathology. cognitive disturbances and. possibly. addic­ tion. The clinical influence of neurohypophysial hormones and their frag­ ments is studied today on learning and memory. on inadequate behaviour and addiction, in Parkinson's disease. Lesch-Nyhan syndrome. depression and schizophrenia. Fragments of adrenocorticotrophin have been shown to affect motivation, concentration and attention. and neuropeptides derived from ~-lipotrophin are probably involved in psychopathology. Thyrotrophin­ releasing hormone has been implicated in depression. and lutein-releasing hormone in sexual disturbances. In spite of the impressive experimental data; clinical results to date have been controversial and. to some extent. anecdotal. In some cases they have been exciting. and in others disappointing. It was against this background that the International Health Foundation decided to organize and sponsor their workshop on 'The brain as an endo­ crine target organ in health and disease' at which the papers appearing in this book were presented.