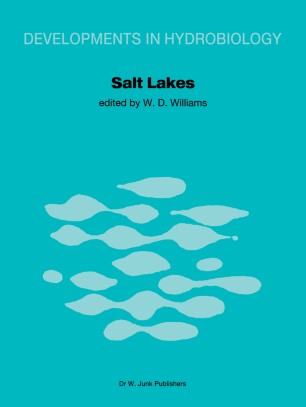 Part of the Developments in Hydrobiology book series (DIHY, volume 5)

This publication is composed of papers presented at an International Symposium on Athalassic (Inland) Salt Lakes, which was hosted by the University of Adelaide, South Australia, during a week in October 1979. The genesis of the Symposium was at the Copenhagen Congress of the International Association of Limnology (S.1. L.) where it was noted that a number of papers concerned with inland saline lakes were distributed throughout sessions in such a way as to make it difficult to attend all of them. A number of participants at the Congress felt that the ecology of salt lakes had greater homogeneity or cohesiveness than this sort of distribution would suggest, and it was decided that a symposium on salt lakes be held. The symposium was the first under the aegis of the S.l. L. to be held in Australia, and it was very well attended, with participants coming from many countries. The week long programme produced a number of lively and interesting sessions on all aspects of athalassic saline lakes. Participants stayed on after the Symposium for an expedition to Lake Eyre, in the nQrth of South Australia, and were given one of the best of all possible introductions to the Australian environment.