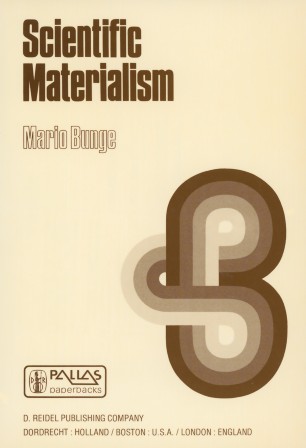 The word 'materialism' is ambiguous: it designates a moral doc­ trine as well as a philosophy and, indeed, an entire world view. Moral materialism is identical with hedonism, or the doctrine that humans should pursue only their own pleasure. Philosophical ma­ terialismis the view that the real worId is composed exclusively of material things. The two doctrines are logically independent: hedonism is consistent with immaterialism, and materialism is compatible with high minded morals. We shall be concerned ex­ c1usively with philosophical materialism. And we shall not confuse it with realism, or the epistemological doctrine that knowIedge, or at any rate scientific knowledge, attempts to represent reality. Philosophical materialism is not a recent fad and it is not a solid block: it is as old as philosophy and it has gone through six quite different stages. The first was ancient materialism, centered around Greek and Indian atomism. The second was the revival of the first during the 17th century. The third was 18th century ma­ terialism, partly derived from one side of Descartes' ambiguous legacy. The fourth was the mid-19th century "scientific" material­ ism, which flourished mainly in Germany and England, and was tied to the upsurge of chemistry and biology. The fifth was dialec­ tical and historical materialism, which accompanied the consolida­ tion of the socialist ideology. And the sixth or current stage, evolved mainly by Australian and American philosophers, is aca­ demic and nonpartisan but otherwise very heterogeneous. Ancient materialism was thoroughly mechanistic.