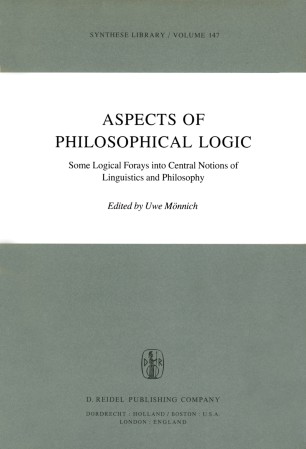 Some Logical Forays into Central Notions of Linguistics and Philosophy

This volume constitutes the Proceedings of a workshop on formal seman­ tics of natural languages which was held in Tiibingen from the 1st to the 3rd of December 1977. Its main body consists of revised versions of most of the papers presented on that occasion. Three supplementary papers (those by Gabbay and Sma by) are included because they seem to be of particular interest in their respective fields. The area covered by the work of scholars engaged in philosophical logic and the formal analysis of natural languages testifies to the live­ liness in those disciplines. It would have been impossible to aim at a complete documentation of relevant research within the limits imposed by a short conference whereas concentration on a single topic would have conveyed the false impression of uniformity foreign to a young and active field. It is hoped that the essays collected in this volume strike a reasonable balance between the two extremes. The topics discussed here certainly belong to the most important ones enjoying the attention of linguists and philosophers alike: the analysis of tense in formal and natural languages (van Benthem, Gabbay), the quickly expanding domain of generalized quantifiers (Goldblatt), the problem of vagueness (Kamp), the connected areas of pronominal reference (Smaby) and presupposition (von Stechow) and, last but not least, modal logic as a sort of all-embracing theoretical framework (Bressan). The workshop which led to this collection formed part of the activities celebrating the 500th anniversary of Tiibingen University.