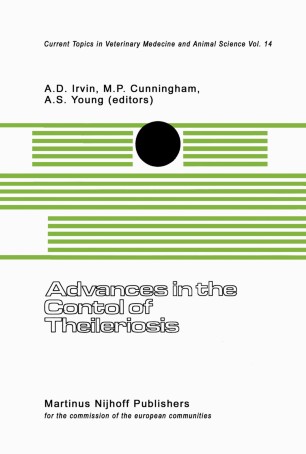 Advances in the Control of Theileriosis

Proceedings of an International Conference held at the International Laboratory for Research on Animal Diseases in Nairobi, 9–13th February, 1981

Approximately five years have elapsed since the Conference on "Tick-borne Diseases and their Vectors" (Wilde, 1978, University of Edinburgh) was held at the Centre for Tropical Veterinary Medicine in Edinburgh. Theileriosis was one of the main topics at that Conference and some 20 scientific presentations were given. Also in the same year a Workshop on "Theileriosis" was held at the Kenyatta Conference Centre in Nairobi (Henson & Campbell, 1977, IDRC, Ottawa). Both of these meetings provided a valuable up­ dating of theilerial diseases, and the Proceedings have been a constant source of reference for scientists in the ensuing years. The meetings played a significant role in setting the scene for a number of important advances which have been made since then. In February of this year, attention was focused on these advances when nearly 200 scientists from over 30 countries were assembled at the International Laboratory for Research on Animal Diseases in Nairobi for the international conference on "Advances in the Control of Theileriosis". The interest and concern shown in this subject has now grown to the extent that more than 70 scientific presentations were given over the course of a very busy week. An important facet of the Conference was the attention given to the control of Theileriosis, since this must be the ultimate aim of all those involved with the disease. Control will be difficult.