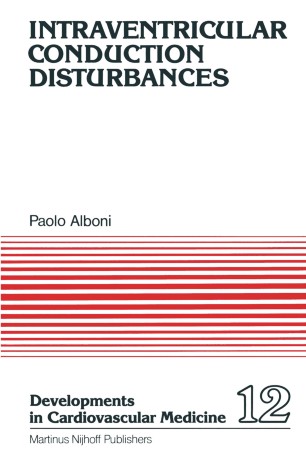 Rhythm was the first expression of cardiac activity which fell under man's obser­ vation, and the heart beat has always represented the very essence of life itself as it accelerates or slows during moments of rest, effort, joy and pain until it comes to a halt at the moment of death. Undoubtedly the heart beat was, for a considerable time, the only semiological element by which man could interpret the dysfunctions of the organism. Even after thousands of years, research into the alterations of cardiac rhythm still holds a certain fascination, although modern methods and sophisticated devices have changed the approach to such studies. Only about ten years ago, the in­ terpretation of arrhythmias was obtained by a standard electrocardiogram to which experimental findings on animals were still arbitrarily applied. On the other hand, the achievement of diagnostic decisions was of little importance outside the sphere of pure intellectual speculation since valid therapeutical treatments were lacking. At present, by means of electrophysiological investigations, one can verify and check 'in situ' the different forms and mechanisms through which rhythm and conduction disorders are manifested. Thus, achieving such a methodology which may be defined as a 'functional biopsy', we are allowed to put forward more accurate therapeutic indications now available using both pharmacological and electrical treatment.