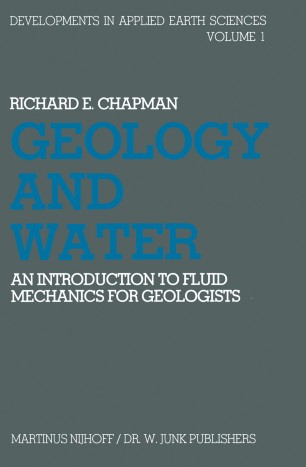 An introduction to fluid mechanics for geologists

Water is one of the world's threatened resources: it is also a substance of importance in Geology. For some years I have felt the need for a book that sets out the fundamentals of fluid mechanics, written for geologists rather than engineers. The efforts to repair my own deficiencies in this respect led me along various unfamiliar paths, few of which were unrewarding. This book is the result of my journeys through the literature and as a geologist in several parts of the world. It has been written for students of geology of all ages, in the simplest terms possible, and it has one objective: to provide a basis for an understanding of the mechanical role of water in geology. It has not been written for experts in ground­ water hydrology, or specialists in the fluid aspects of structural geology: it has been written for geologists like me who are not very good mathematicians, so that we can take water better into account in our normal geological work, whatever it might be. The fundamentals apply equally to mineralization, geochemistry, and vulcanology although they have not been specifically mentioned. It has also been written for the university student of geology so that he or she may start a career with some appreciation of the importance of water, and understanding of its movement.