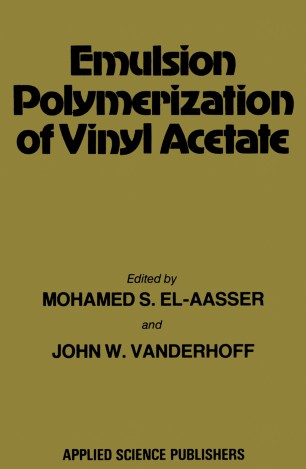 It is particularly appropriate that this symposium on the emulsion polymeriza­ tion of vinyl acetate was held in recognition of the industrial importance of poly(vinyl acetate) and vinyl acetate copolymers, and their rather unique properties among emulsion polymers in general. Poly( vinyl acetate) latexes were the first synthetic polymer latexes to be made on a commercial scale: their production using polyvinyl alcohol as emulsifier began in Germany during the mid-1930s and has continued to the present day, growing steadily with the years. Indeed, poly(vinyl acetate) latexes prepared with polyvinyl alcohol are still one of the mainstays of the adhesives industry. With the passing of time, however, vinyl acetate copolymers have been developed: copolymers with maleate esters such as dibutyl maleate, acrylate esters such as ethyl acrylate and butyl acrylate, versatic acid esters, and, more recently, ethylene. These versatile copolymers have found increasing use in more sophisticated adhesives with specialized properties, adhesives for clay coatings on paper, carpet backing, and interior and exterior paints. Thus more than 45 years after the first commercial production of vinyl acetate latexes, their use is still growing, both in actual quantities and different applications. The industrial importance of vinyl acetate latexes makes the mechanism and kinetics of their emulsion polymerization of practical as well as scientific interest.