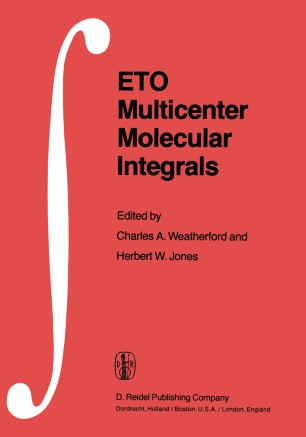 The First International Conference on ETO Multicenter Molecular Integrals was held August 3-6, 1981, on the Florida A&M university campus in Tallahassee, Florida, USA. Thirty four scientists from eight countries assembled in Tallahassee under the sponsorship of the Institute for Molecular Computations and the Physics Department at Florida A&M. Financial support is gratefully acknowledged from the National Science Foundation, U.S. Army Research Office (Durham), Office of Naval Research, the National Aeronautics and Space Admini­ stration (NASA), and Florida A&M University. In particular, the editors would like to thank Dr. Joe Majowicz and Dr. David Squire of the U.S. Army, and Dr. Aaron Temkin of NASA for their support and encouragement. We would also like to acknowledge the Atlanta University Resource Center for Science and Engineering for financial support in the pre­ paration of the manuscript. Also, of course, we sincerely appreciate the participation of the attendees and especially the contributors to this work. As a result of their presentations, the conference was a very intense and fertile forum for the exchange of ideas on a very important and historic problem of quantum chemistry. Finally, we want to thank Ms. Sonja Richardson for the enthusiastic, diligent and competent preparation of a very difficult manuscript. Charles A. Weatherford Herbert W. Jones vii C. A. Weatherford and H. W. Jones (eds.), ETO Multicenter Molecular Inteffrals, vii.