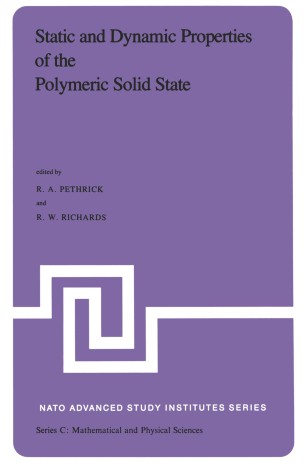 Static and Dynamic Properties of the Polymeric Solid State

This volume contains the major portion of the material given at the NATO Advanced Study Institute, held at the University of Strathclyde, Glasgow, UK. , September 6th-18th, 1981. The original idea germin­ ated in a conversation between the organisers on a cold December night in 1978 in the depths of the Oxfordshire countryside. At that time we felt that the chemical physics of macromolecules in the solid state was running on two parallel tracks, namely structure and dynamics. The contact between the two appeared to be slight. We were also concerned that the degree of srecial knowledge now required for any one technique essentially prevented people from learning the important features of other investigation methods. Consequently, we have attempted to bring together leading authorities on both structural and dynamic properties of solid polymers in the hope that the combination of both types of discussion will be synergistic. The choice of main subjects is our own and we are aware that some areas have been omitted. HOvlever, to be comprehensive would have made an already large volume enormous. Y'Je therefore chose to concentrate on what were, in our opinion, the major areas. Nonetheless, it is apparent that much ori~inal material appears here, especially in those contri­ butions which are more theoretical in concent, the full experimental iMnlications of which have yet to be investigated.