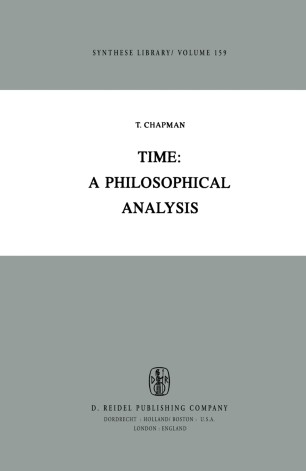 This book is intended as an exposition of a particular theory of time in the sense of an interrelated set of attempted solutions to philosophical problems about it. Generally speaking there are two views about time held by philosophers and some scientists interested in philosophical issues. The first called the A-theory (after McTaggart's expression A-determinations for the properties of being past, present or future) is often thought to be closer to our commonsense view of time or to the concept of time presupposed by ordinary language. It includes at least the following theses, (a) Logic ought really to include tensed quantifiers for existence on one of its important usages means, present existence. More generally, we can't reduce all tensed locutions to tenseless ones. (b) The distinction between past, present and future is an objective one. It is not, for example, dependent on our consciousness of change; some A-theorists hold also, that the distinction, in effect, is an absolute one.