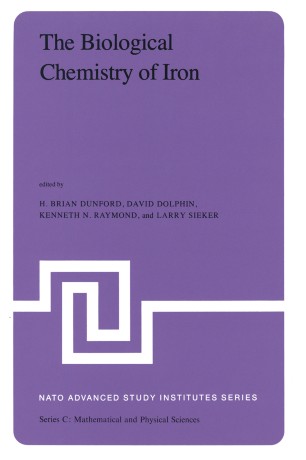 The Biological Chemistry of Iron

A Look at the Metabolism of Iron and Its Subsequent Uses in Living Organisms Proceedings of the NATO Advanced Study Institute held at Edmonton, Alberta, Canada, August 13 – September 4, 1981

The results of a NATO Advanced Study Institute (ASI) entitled "Coordination Chemistry Environments in Iron-Containing Proteins and Enzymes - Including Smaller Molecules and Model Systems" are summarized in this book. The ASI was held in the Province of Alberta, Canada, from August 23 to September 4, 1981. The first half of the conference was held on the campus of the University of Alberta, Edmonton, and the second half at the Overlander Lodge, Hinton. Two other conferences had the greatest impact upon the planning for this ASI. One was a NATO ASI held in Tomar, Portugal in September of 1979, entitled "Metal Ions in Biology". Among the organizers for that conference were Allen Hill and Antonio Xavier; we are happy to acknowledge their beneficial influence on our subsequent conference. The other most influential conference was one organized by Ralph Wilkins and Dennis Darnell entitled "Methods for Determining Metal Ion Environments in Proteins" which was held in Las Cruces, New Mexico, U.S.A., January 10-12, 1979. The Las Cruces conference invited lectures were published as Volume 2 of "Advances in Inorganic Biochemistry", G. Eichhorn and L. Marzilli, editors.