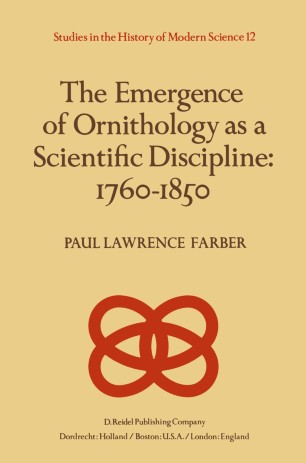 The Emergence of Ornithology as a Scientific Discipline: 1760–1850

Part of the Studies in the History of Modern Science book series (SHMS, volume 12)

A number of years ago I began a project to derme and evaluate the impact of Buffon's Histoire naturelle on the science of the late eighteenth and early nineteenth centuries. My attention, however, was soon diverted by the striking difference between the highly literary natural history of Buffon and the duller, but more rigor­ ous, zoology of his successors, and I began to try to understand this transformation of natural history into a set of separate scientific disciplines (geology, botany, ornithology, entomology, ichthyology, etc. ). Historical literature on the emergence of the biological sciences in the early nineteenth century is, unfortunately, scant. ! Indeed the entire issue of the emergence of scientific disciplines in general is poorly documented. A recent collection of articles on the subject states: One reason for this is, of course, that scientific development is a highly com­ plex process. Consequently, there has been a tendency for those engaged in its empirical study to select for close attention one strand or a small number of strands from the complicated web of social and intellectual factors at work. Many historians, for example, have dealt primarily with the internal development of scientific knowledge within given fields of inquiry. Sociologists, in contrast, have tended to concentrate on the social processes associated with the activities of scientists; but at the same time 2 they have largely ignored the intellectual content of science.