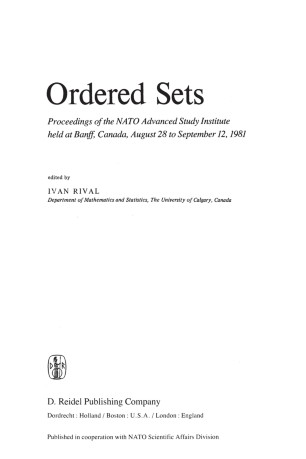 This volume contains all twenty-three of the principal survey papers presented at the Symposium on Ordered Sets held at Banff, Canada from August 28 to September 12, 1981. The Symposium was supported by grants from the NATO Advanced Study Institute programme, the Natural Sciences and Engineering Research Council of Canada, the Canadian Mathematical Society Summer Research Institute programme, and the University of Calgary. tve are very grateful to these Organizations for their considerable interest and support. Over forty years ago on April 15, 1938 the first Symposium on Lattice Theory was held in Charlottesville, U.S.A. in conjunction with a meeting of the American Mathematical Society. The principal addresses on that occasion were Lattices and their applications by G. Birkhoff, On the application of structure theory to groups by O. Ore, and The representation of Boolean algebras by M. H. Stone. The texts of these addresses and three others by R. Baer, H. M. MacNeille, and K. Menger appear in the Bulletin of the American Mathematical Society, Volume 44, 1938. In those days the theory of ordered sets, and especially lattice theory was described as a "vigorous and promising younger brother of group theory." Some early workers hoped that lattice­ theoretic methods would lead to solutions of important problems in group theory.