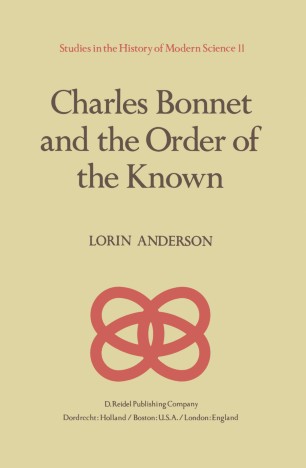 Charles Bonnet and the Order of the Known

Part of the Studies in the History of Modern Science book series (SHMS, volume 11)

Charles Bonnet began his career as a naturalist, from an early age establishing a reputation as a careful observer. It is for those youthful observations, as well as for some suggestive speculations proposed relative to this field, that he is best remembered in English-speaking countries: regarding the taxonomic de­ mands of natural history he refurbished the idea of a chain of beings; regarding the question of generation he marshaled evidence in support of preforma­ tion theory; and regarding the analysis of the physiology of the nervous system he advanced a theory that individual nerve fibers receive and retain specific sensations. Following his loss of eyesight in his mid-twenties Bonnet entered a more reflective period, turning to philosophy and pondering the nature of human understanding - considerations he had formerly disdained, but that now seemed a natural outgrowth of his reflections on nature. This essay focuses on the philosophical and psychological works of the later period, the period in which he wrote all his major books. By giving these writings a broader exposure it has been one of my hopes that Bonnet's audience would also be broadened, releasing him, so to speak, from the charge of historians of science so that he might fmd his way, in general books on the "Enlightenment", from scattered footnotes into the texts themselves.