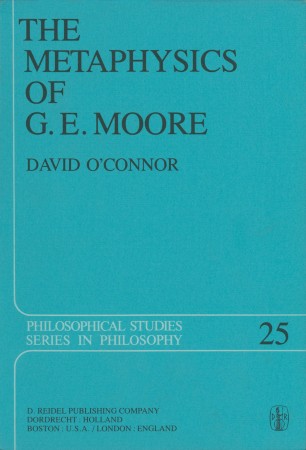 The Metaphysics of G. E. Moore

In this book, setting aside his consideration of specifically ethical topics, I try to provide a comprehensive interpretation of Moore's thought. Against the background of this general interpretation I examine in detail his work on some of the central problems of metaphysics and, because Moore's being able to sustain a consistent anti-skepticism is essential to the survival of the base from which he works on those problems, of epistemology too. The interpretation of which I speak involves my taking as the centerpiece of Moore's philosophical work his book, Some Main Problems of Philosophy, written in 1910 as the text of a lecture series but left unpublished for over forty years thereafter. That book is aptly titled, for the issues with which Moore deals in it are indeed among the main problems of philosophy. Not least of these are the problems of formulating a general categorial deSCription of the world and then of defending that formulation. However, while I will discuss Moore's work in light of its contribution to this project of taking metaphysical inventory, it is important to note that he, in common with many other major figures in contemporary analytical philosophy, did not approach specific philosophical puzzles with a view to possibly integrating solutions to them into a comprehensive theory about reality as a whole, that is, into what might be called a metaphysical system.