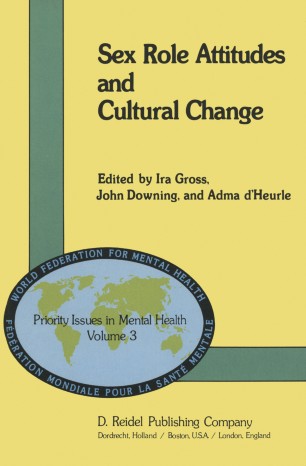 The initial impetus for this volume was the occasion of the World Congress for Mental Health held in Vancouver, British Columbia in 1977. The theme of that congress was priorities in mental health. The keynote speaker Mrs. Rosalynn Carter, wife of the then President of the United States, focused attention on the necessity for an international perspective in understanding priorities for mental health. Without exception subsequent speakers echoed the sentiments Mrs. Carter expressed, that the first priority for mental health was that of children. For many participants the concern for children was translated not only into techniques for treatment but more importantly into broadening the approaches to prevention. One theme emerged which has begun to be addressed around the world - that of the cultural and developmental implications of sex role stereotyping for mental health. This topic proved to be the touchstone for many issues related both directly and indirectly to mental health. Among the most prominent concerns expressed were those for the effects on careers, the learning environment and relations between the sexes which stem from stereotyped attitudes concerning appropriate sex role behavior. The consensus of the par­ tiCipants was to urge the directorate of the congress to continue this topic at the next World Congress. This was a particularly appropriate content for the next World Congress, since 1979 was the International Year of the Child.