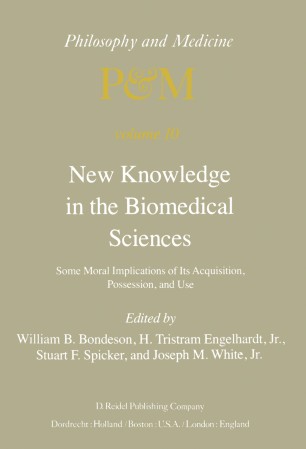 New Knowledge in the Biomedical Sciences

Some Moral Implications of Its Acquisition, Possession, and Use

Part of the Philosophy and Medicine book series (PHME, volume 10)

The spectacular development of medical knowledge over the last two centuries has brought intrusive advances in the capabilities of medical technology. These advances have been remarkable over the last century, but especially over the last few decades, culminating in such high technology interventions as heart transplants and renal dialysis. These increases in medical powers have attracted societal interest in acquiring more such knowledge. They have also spawned concerns regarding the use of human subjects in research and regarding the byproducts of basic research as in the recent recombinant DNA debate. As a consequence of the development of new biomedical knowledge, physicians and biomedical scientists have been placed in positions of new power and responsibility. The emergence of this group of powerful and knowledgeable experts has occasioned debates regarding the accountability of physicians and biomedical scientists. But beyond that, the very investment of resources in the acquisition of new knowledge has been questioned. Societies must decide whether finite resources would not be better invested at this juncture, or in general, in the alleviation of the problems of hunger or in raising general health standards through interventions which are less dependent on the intensive use of high technology. To put issues in this fashion touches on philosophical notions concerning the claims of distributive justice and the ownership of biomedical knowledge.