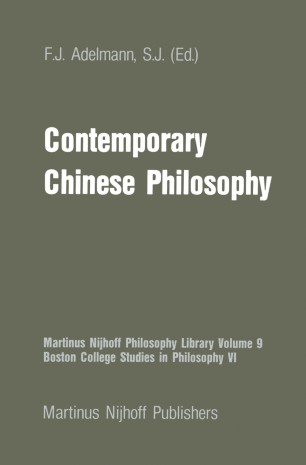 The idea of the present sixth volume in the Boston Col­ lege Studies in Philosophy entitled "Contemporary Chinese Philosophy" was conceived by the editor several years ago, before the current resumption of Chinese­ American political and economic amity occurred offi­ cially. Several preceding volumes in this series had studied various aspects of Marxism especially Soviet Marxism. Possibilities for dialogue between Christians and Marxists were discussed not only in the series but elsewhere too in various philosophical journals and books through the sixties and seventies. It was only a natural outcome then to wonder about the same possi­ bilities in regard to Chinese Marxism. Hence I sent off to many potential contributors - scholars in the field - the following proposal seeking papers for a volume on Contemporary Chinese Philosophy. The themes that should constitute the content of the articles were as follows: 1. How rigidly do contemporary Chinese adhere to Marxism-Leninism? Naturally this means principally the educated persons, but it might include the non-academic segment of the peop. le. By Marxism-Leninism here, J mean the contemporary Soviet brand. Hence, I do not. mean Marx's early writings or the developments of people like Kolakowski. 2 . Are they constrained to think in a kind of hori­ zontal materialism or are they open to a species of transcendence that might include the God problem or a belief in another life after this one on earth? 3.