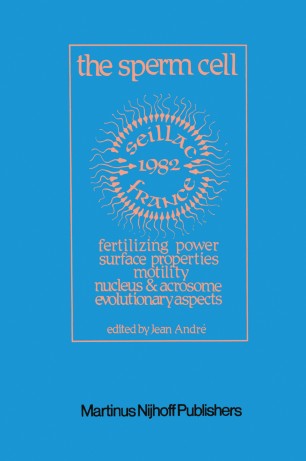 , Jean ANDRE Universite de Paris XI, ORSAY, France. Sperm cells have long been considered as the most highly specialized of all living cells. They surely are, being very diverse, very complex, containing organelles which do not exist in any other cell -such as acrosome or crystallized mitochondria- and being endowed with a very unique behaviour, that is to meet and recognize the ovum, pierce its protective envelopes and inject into its cytoplasm a most precious deposit, the haploid genome of the species. It is Baccio Baccetti's merit to have felt the need for a confrontation of the scientists working on sperm in order to clarify the apparent complexity of the enormous amount of knowledge accumulated on the subject. Thus, he successfully inaugurated the series of the InternationaZ Symposia on SpermatoZogy. The Seillac edition is the fourth in the series. After an initial stage during which morphology was predominant, our meetings have turned more and more towards function. It has been the will of the French Organizing Committee to devote this meeting mainly to Eutherians, and, among those, to man, in connection with the conflicting necessities to help the sterile couples and to contrul the population explosion at the surface of the world.