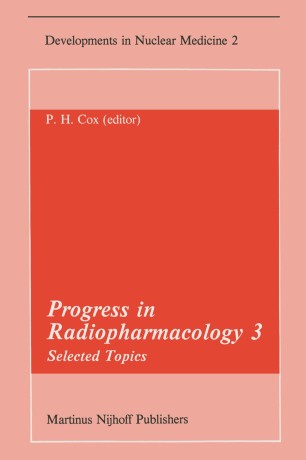 Selected Topics Proceedings of the Third European Symposium on Radiopharmacology held at Noordwijkerhout, The Netherlands, April 22–24, 1982

The publication of this volume, which is based upon presentations made to the Third European Symposium on Radiopharmacology at Noordwijkerhout, April 22 - 24, 1982, is indicative of the continued interest in this sub-branch of Nuclear Medicine. The transactions of the first two meetings were published as Progress in Radiopharmacology, Volumes 1 and 2 by Elsevier/North-Holland Bio­ medical Press. We are particularly pleased to have reached an agreement with Martinus Nijhoff Publishers to include Progress in Radiopharmacology 3 in the series Developments in Nuclear Medicine. This not only ensures the continuity of the series but by including it in a series of Nuclear Medical Monographs the availability of the text to more general readers, for background information, is greatly enhanced. As with the previous two volumes each of the three topics has been so treated as to relate the biodistribution of the radiopharmaceuticals to normal and pathophysiological conditions to provide background information for the practising nuclear medical specialist. Special attention has been given to European activities but these have been clearly placed in context in relation to developments from outside Europe. The Third European Symposium on Radiopharmacology was held under the auspices of the European Joint Commitee on Radiopharmaceuticals of the European Nuclear Medicine Society and the Society of Nuclear Medicine Europe. Solco Nuclear, Basle, provided both financial and material support and I would like to thank Dr M. de Schrijver, Mr. I. Waser and Mrs. E. Rufenacht for their continued help and encouragement.