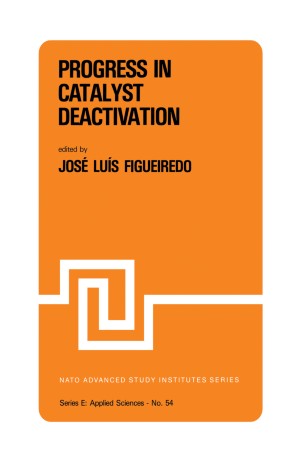 Proceedings of the NATO Advanced Study Institute on Catalyst Deactivation, Algarve, Portugal, May 18–29, 1981

Most catalysts used in the chemical and petrochemical indus­ tries are strongly affected by one or another form of deactivation, leading to poor performances and reduced life. The increasing num­ ber of scientific communications devoted to the subject in recent years, and culminating with an International Symposium held in Antwerp in October 1980, is a measure of the interest it arouses in both the industrial and academic communities. A stage has been reached whereby it was thought that a NATO Advanced Study Institute on "Catalyst Deactivation" might be fruit ful in establishing the state of the art and in stimulating a more systematic research on the phenomenon. Such a meeting was held ~n Lagos, Portugal, from 18 to 29 May 1981. The purpose of the Institute was to present and discuss in a didatic and systematic way the various processes that lead to cata lyst deactivation, namely coking, poisoning and solid state trans formations, and at the same time to promote the exchange of ideas and experiences among the participants, drawn from industry and uni versity. The lectures presented at the Institute are collected in this volume with the exception of Dr. L.L.Hegedus "Catalyst Poisoning", which has been previously published (Catalysis Reviews, Science md Engineering, 23, 377-476, 1981).