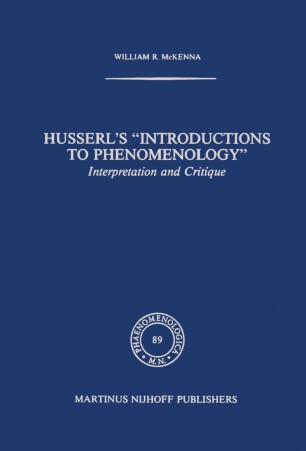 There is a remarkable unity to the work of Edmund Husserl, but there are also many difficulties in it. The unity is the result of a single personal and philo­ sophical quest working itself out in concrete phenomenological analyses; the difficulties are due to the inadequacy of initial conceptions which becomes felt as those analyses become progressively deeper and more extensive. ! Anyone who has followed the course of Husserl's work is struck by the constant reemergence of the same problems and by the insightfulness of the inquiries which press toward their solution. However one also becomes aware of Husserl's own dissatisfaction with his work, once so movingly expressed in a 2 personal note. It is the purpose of the present work to examine and revive one of the issues which gave Husserl difficulty, namely, the problem of an intro­ duction to phenomenology. Several of Husserl's writings published after Logical Investigations were either subtitled or referred to by him as "introductions to phenomenology. "3 These works serve to acquaint the reader with the specific character of Husserl's transcendental phenomenology and with the problems to which it is to provide the solution. They include discussions and analyses which pertain to what has come to be known as "ways" into transcendental phenomenology. 4 The issue here is the proper access to transcendental phenomenology.