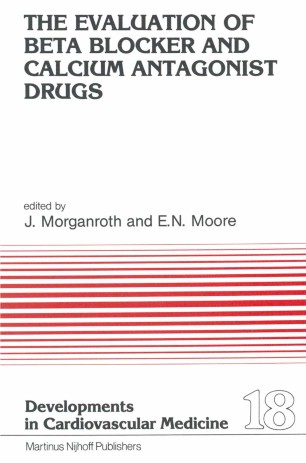 The Evaluation of Beta Blocker and Calcium Antagonist Drugs

With the beginning of the 1980's it was becoming increasingly evident that the lack of approval of new cardiovascular agents for use by clinicians in the United States for the treatment of cardiovascular disorders was becoming a problem. Patients requiring medical therapy for hypertension, angina pectoris, arrhythmias, congestive heart failure, and vasospastic disorders of the coronary arteries could receive in the United States only a small number of the drugs available to physicians in the rest of the world. In fact, as the 1980's began, there was only one available beta blocking agent released by The Food and Drug Administration; and even as of this writing, no oral calcium antagonist agent. This lag, in part, has been due to the confusion of proper and expeditious methods to define safety and efficacy of such agents so that the United States regulatory agency (Food and Drug Administration) could approve the use of such agents by clinicians. The vast number of new beta blocker and calcium antagonist agents being developed, as well as the long-term use abroad of many new drugs, has raised important questions as to how relative safety and efficacy of such agents can be determined to facilitate availability in the United States.